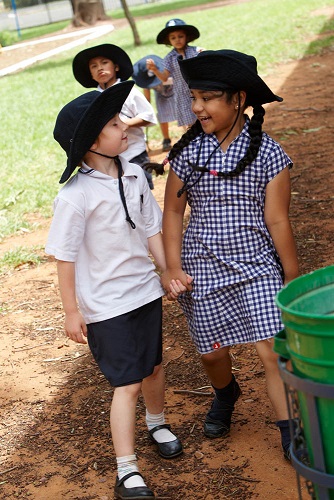 ‘It will be a wasteland if we don’t recycle,’ stated a four-year-old child in a recent preschool study (Edwards & Cutter-Mackenzie, 2011), as he carefully searched for the triangle on the bottom of a plastic bottle and sorted it into the recycling bin. ‘It’s got a triangle five, woohoo!’ he exclaimed.

Young children in many early childhood settings around the world are demonstrating awareness of their impact on the environment and ways to minimise it. A five-year-old in Ireland reportedly explained to an international research group that sustainability means ‘to save the world for later’ (OMEP Congress, Sweden, 2010), yet many adults still grapple with sustainability terms and practices and whether we should be teaching this sort of content to young children (Cutter-Mackenzie & Edwards, 2006).

The underpinning ideals of the national Early Years Learning Framework not only reinforce these earlier statements but strongly recommend that sustainability be ‘embedded in all daily routines and practices’ (DEEWR, 2009, p. 29) within early childhood settings, and that early childhood educators need to discuss with children that all ‘living things are interconnected’ (DEEWR, 2009, p. 29) through the considered use of intentional teaching. Questions about how best to balance the role of intentional teaching with children, as opposed to setting up environments for open-ended play and acting as a facilitator to children’s learning, are becoming increasingly evident in discussions with educators (Thomas, Warren & de Vries, 2011). Siraj-Blatchford (2009) suggests that intentional teaching can be seen as ‘sustained shared thinking’, where the educator and child can have engaged conversations to promote learning. Despite these changes to curriculum and environmental education, recent surveys in local government services identified that many early childhood educators have expressed a knowledge gap in not only what to teach young children about sustainability, but how to go about teaching it (City of Knox, Staff Survey, 2010).

To investigate this multifaceted dilemma further, researchers Edwards and Cutter-Mackenzie (2011) implemented a study through an Australian Research Council Discovery Grant, working with a number of early childhood educators and children using different modes of teaching and learning about sustainability concepts. In a fascinating dichotomy, although one of the teachers involved in the study had a science degree, she was still hesitant to teach science to young children, and noted that although she had always wanted to talk about recycling with the children, she felt it was too difficult to do so:

For the purpose of the study, this teacher decided to set up a recycling experience for children, sorting items for the recycling bin, the rubbish bin or the worm farm bucket. The children were offered this activity three times. First, they had a ‘modelled play’ scenario, where the teacher demonstrated how to recycle, including looking for triangles under the plastic objects, using the tongs and investigating the laminated triangle chart. The following time, the children were given ‘an open-ended play’ experience with the same rubbish materials, but with the teacher standing aside to allow the children to problem solve. The third time was in a ‘purposeful play’ mode—connected with ideas about intentional teaching—with more interaction and discussion between the teacher and the children, and more resources on hand to explore concepts further.

The children were filmed during all of these experiences, and then filmed again while watching themselves on video (each time with child and parental consent), with the researchers asking the children what they thought they were doing whilst recycling. It was intriguing to hear the children talk about how they considered they were ‘working’ when they were recycling, whereas playing was ‘running around and doing stuff’. The children enjoyed the different modes of teaching and learning, for example, ‘when [the teacher] taught them how to do it’ as well as just ‘doing it on their own’.

At the conclusion of the study, the teacher said she was surprised with the amount of interest and intense engagement the children displayed in these recycling sessions. She said she felt as if she and the children were ‘on a mission’ to complete the recycling project. This was further reinforced by the children commenting that they were not ‘playing but working’ on a meaningful ‘important job’. The teacher also felt increased confidence in how to approach science and sustainability in her teaching, and planned to continue with this method of combining open-ended and modelled teacher activity to form purposeful play. Purposeful play helped her to have conversations with children that supported intentional teaching about sustainable concepts in practice. She was especially encouraged by the positive reaction of both the children and their families in this recycling trial. For example, parents said, ‘It’s part of life and it’s really important for children to learn that’.

This study of how to approach teaching and learning about sustainability through different modes of play highlights how capable young children are in understanding complex concepts (Edwards & Cutter-Mackenzie, 2011). Thinking about intentional teaching and sustainability might mean considering the importance and value children might attach to what they see as work and play. It also might involve thinking about how different types of play and teacher engagement can be blended to support children’s learning in this area.

The research reported in this paper was funded by the Australian Research Council under the Discovery Project Scheme 2010-2011.

Siraj-Blatchford, I. (2009). Conceptualising progression in the pedagogy of play and shared ustained thinking in early childhood education: a Vygotskian perspective. Educational and Child Psychology, 26(2), 77–89.

Good information. Lucky me I recently found your blog by accident (stumbleupon).
I have book-marked it for later!