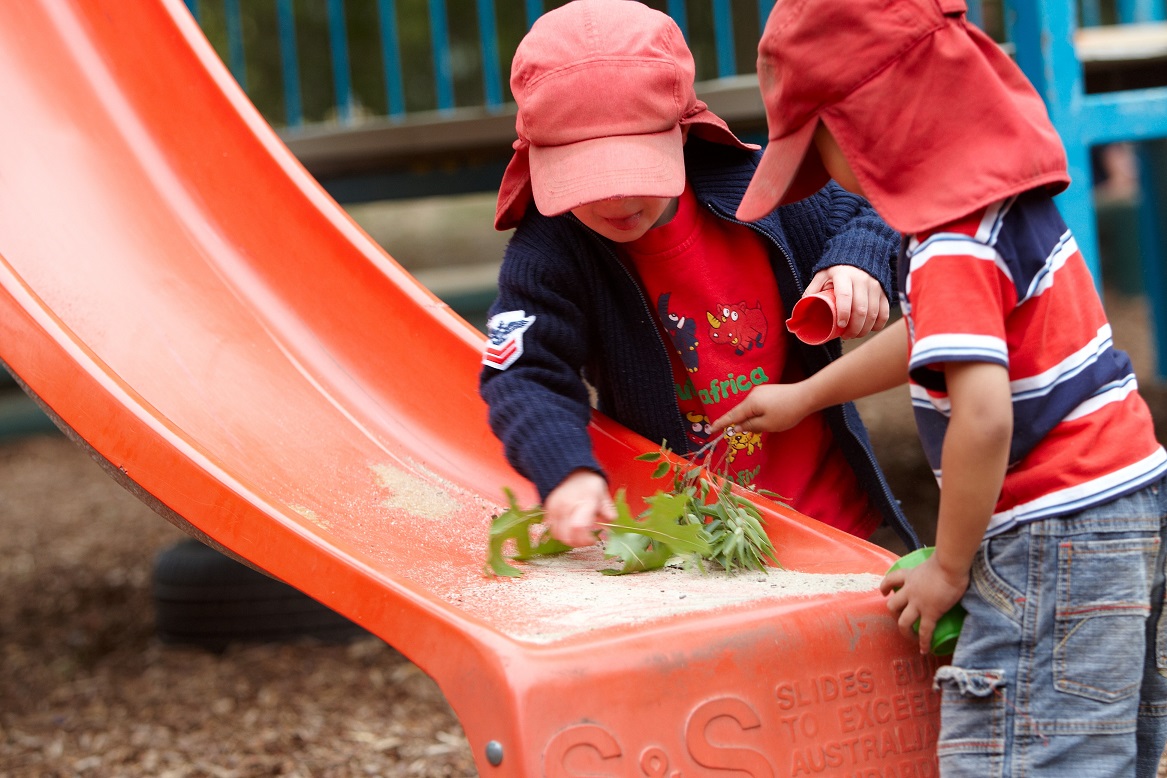 ‘ … for the EYLF to be implemented properly, all early childhood educators need to know what play is, why it is important, how to implement and assess a play-based program and their role in it.’

In implementing the EYLF, educators should discuss and describe their understandings of the practice principles. One of the practices most commonly used in the early childhood sector is ‘learning through play’. Play-based learning is described in the EYLF as ‘a context for learning through which children organise and make sense of their social worlds, as they actively engage with people, objects and representations’ (EYLF, 2009, p. 46). But what is play? Play is hard to define as there are a number of theories and types of play. Can you describe play?

While there is no one definition of play, there are a number of agreed characteristics that describe play. Play can be described as:

Once you have decided what play means to you, you should next ask yourself, why play-based learning? What is it about play that makes it so important? Play has a long and detailed research history that dates back to the work of Locke and Rosseau.

Research and evidence all point to the role of play in children’s development and learning across cultures (Shipley, 2008). Many believe that it is impossible to disentangle children’s play, learning and development.

While research on brain development is in its infancy, it is believed that play shapes the structural design of the brain. We know that secure attachments and stimulation are significant aspects of brain development; play provides active exploration that assists in building and strengthening brain pathways. Play creates a brain that has increased ‘flexibility and improved potential for learning later in life’ (Lester & Russell, 2008, p. 9).

Young children’s play allows them to explore, identify, negotiate, take risks and create meaning. The intellectual and cognitive benefits of playing have been well documented. Children who engage in quality play experiences are more likely to have well-developed memory skills, language development, and are able to regulate their behaviour, leading to enhanced school adjustment and academic learning (Bodrova & Leong, 2005).

Physically active play allows children to test and develop all types of motor skills. It promotes significant health and wellbeing benefits. Centres that were found to have a high-quality, play-based learning program incorporated:

Play does not happen in a vacuum; it is usually undertaken within a physical and social space (Lester & Russell, 2008). One of the greatest benefits of playing is to assist with the development of social competence. Children can build relationships, learn to resolve conflicts, negotiate and regulate their behaviours. In play, children usually have increased feelings of success and optimism as they act as their own agents and make their own choices. Playing is a known stress release; it is often linked to child wellbeing.

The dispositions for learning, such as curiosity, openness, optimism, resilience, concentration, and creativity (SACSA, 2009), are developed in play. Playing is linked to the development of resilience and the beginnings of empathy as children begin to understand other points of view. However, not all play is kind or inclusive, so educators have to act accordingly to ensure that play is not harmful.

What educators can do

How can quality play-based learning take place effectively? Early childhood educators should know the children and families in their centre; they assess, document children’s learning and know their interests. Then, together with families, they plan carefully how to use play-based activities as one tool to promote the learning that will achieve the EYLF outcomes.

Planning the environment to assist children to achieve outcomes is important in providing quality play experiences. The environment can be intentionally planned in four main ways:

This article was originally published in Every Child magazine Vol. 16 No. 3.

Siraj-Blatchford, I. (2008). Understanding the relationship between curriculum, pedagogy and progression in learning in early childhood. Hong Kong Journal of Early Childhood, 7 (2), 6-13.

5 thoughts on “Why play-based learning?”

Play based learning and testing testing testing does not work well with 4 year olds or VPK. Either they play and do not learn all kindergarten wants them to know or they learn at their pace and may not “score well” on the kindergarten competency exams. Very very frustrating at times

In my understanding, [l]earning through play doesn’t mean play without learning. It should be more of a creative and relaxing way of learning for children. The stress of not “score well” comes from comparing. In most cases, this could be children not being guided with knowledge that they need to learn effectively while playing. This is the difficult part that we adults need to work out. Play based learning can be using pencil to do mazes or using playdough to make a letter or even a word for a 4 years old. After doing all these fun activity and making them feel good about themselves. With that confidence and skill gained through play, they sure will be able to write a word.

While there is plenty of evidence about play fostering learning, the proposition, following Vygotsky, that children learn through play ‘scaffolded’ by adults is unsubstantiated simply because the hypothesis is untestable.

Play backed learning promotes learning across all fields. Children should be supported in this by facilitating the materials to accomplish their goals and learning.there is too much focus on academics children should be given the time to learn at their own pace as everyone’s learning is not the same children excelle when given oppertunities to explore their ideas and focuses they may have a particular interest in math ,science ,tech or construction those interests need to be scaffolded and nurtured these interest change when they feel they have mastered that particular field.