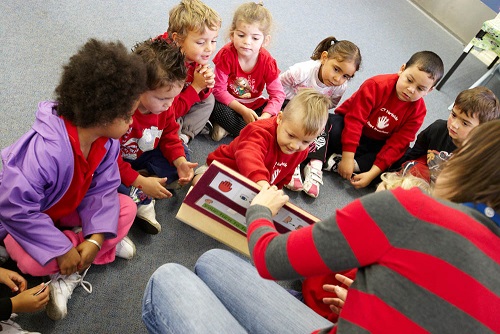 At the end of January 2017, more than 320,000 children will have their first day at kindergarten.

Over the course of the year, early childhood teachers and educators will use their expertise and knowledge to build those children’s social, emotional, literacy and numeracy skills, their critical and creative thinking, their perseverance, sociability and self-esteem.

These children will directly benefit from the Universal Access funding agreement, which sees 15 hours of kindergarten per week provided at low cost to families for children in the year before school.

But the class of 2017 may be the last to enjoy this support.

Under the National Partnership Agreement on Universal Access to Early Childhood Education, Victoria pays for more than two-thirds of government funding of 15 hours of kindergarten in the year before school, with the Federal Government contributing the rest.

The Universal Access funding arrangement is now looking increasingly shaky. The current agreement is set to run out at the end of 2017, and there’s been no sign from the Federal Government that they will end the uncertainty and commit to ongoing funding for 15 hours once and for all.

Rather, the Turnbull Government is suggesting it is backing away from the agreement altogether, with Federal Minister for Education, Simon Birmingham indicating that the federal government’s share of funding has only been a “top-up” contribution to lift kindergarten participation levels over the short term.

This is selling families short. Far from being a stopgap measure, federal funding is integral to delivering more hours at kindergarten to more children.

This is not the first time we have seen this sort of equivocation from the Federal Government on the Universal Access Agreement. This is the fourth consecutive short-term arrangement.

Having to regularly face this insecurity and worry takes a toll on both services and families.

This uncertainty affects planning for budgets, staffing and most importantly how early education is delivered to children during what is an optimal time for them to learn. It also affects how well families can prepare for the coming year, and the childcare and working arrangements they have to make well in advance.

Most importantly, though, is the potential impact this will have on children.

We know the difference that 15 hours of kindergarten per week makes to a child in the year before school.

Fifteen hours of kindergarten supports children’s development and improves school readiness, as found by the Productivity Commission in 2015.

The Federal Liberal’s share of funding is critical in delivering the 15 hours of quality early learning that has real, lasting and positive effects on children at school and in later life. It represents a shared commitment across Australian governments to investment in early education, and to the social and economic benefits that follow.

In 2017, every single one of Victoria’s 2300 funded kindergartens will be providing children with 15 hours of quality, teacher-led preschool education per week in the vital year before school, showing how in demand this additional support is.

Kindergartens and the talented, dedicated people who run them deserve better.

The Andrews Labor Government is calling on Malcolm Turnbull to end this cycle of equivocation and commit once and for all to ongoing funding for 15 hours of kindergarten per week for children in the year before school.

Thanks for your support of the 15 hours funding… we need this to be sorted. The sector and families do not care who pays or what percentage each agrees to contributing… this just needs to be funded once and for all.

In 2012 I began volunteering in a 3 year old and 4 year old Kinder. After a couple of years volunteering at this Kinder, I made the decision to retrain and complete a Diploma in Early Education and Care Course. I have since been working as a Learning Assistant in Prep classrooms. I still continue to volunteer one morning a week in this Kinder. I have been part of the process of working with children in the 3 year old and 4 year old Kinder for four years and have witnessed the transformation of the children in their readiness for school. I believe that Kinders play a huge part in building children’s readiness for school and success at school. I hope that our government will make the funding of four year old 15 Hours of Kinder an ongoing permanent commitment. The early years are so crucial to childrens’ learning. In the 1970’s and 1980’s I was a primary school teacher. I remember childrens’ readiness for school in comparison to children who have attended Kinder in recent times. There is a huge difference. I believe our whole community benefits from the government funding the 15 hour Kinders across our country.

I have to say I have never been a big fan of the ’15 hours’ of funding. It is a reminder of what seemed like a Kevin Rudd ‘thought bubble’ that was introduced without consultation with the field. Most kindergartens had not idea how to adjust their tight schedules to make this happen, and more importantly, make it happen in ways that would be educationally meaningful.
So I am all for increased funding and attention for early childhood services, but I would prefer this to happen in ways that were actually useful, to working parents, to curious children, and to the teaching workforce themselves.

Instead of spending money on developing and implementing their new national test for 6 year olds, the Government would get far better value for their money if they committed to supporting at least 15 hours of preschool for every child in the year before school entry.

My second child benefited from the 15 hours Kinder program and it had a remarkable impact on her confidence and preparedness for school as well as providing her with invaluable life skills. I wish my first child could have benefits from this awesome program.

It is sad to see that the initial ideas and importance of school readiness has been lost in WA. People genuinely believe that kindergarten is school over here. We are seeing it become the place for learning the alphabet and sight words, being expected to write and no not just your name. I feel it is definitely time for review and reflection as to its usefulness. I ultimately believe it to be useful I myself went through a pre school program in the early 1980’s which I remember fondly it certainly was a benefit.

You gotta be kidding me. That is not enough at all. Kindergarten should be 4-5 days a week like other western countries. This is simply neglecting kids to wanderaround with mum at the supermarket and post office instead of a constructed play and learning with kids their age. Social skills, anyone?