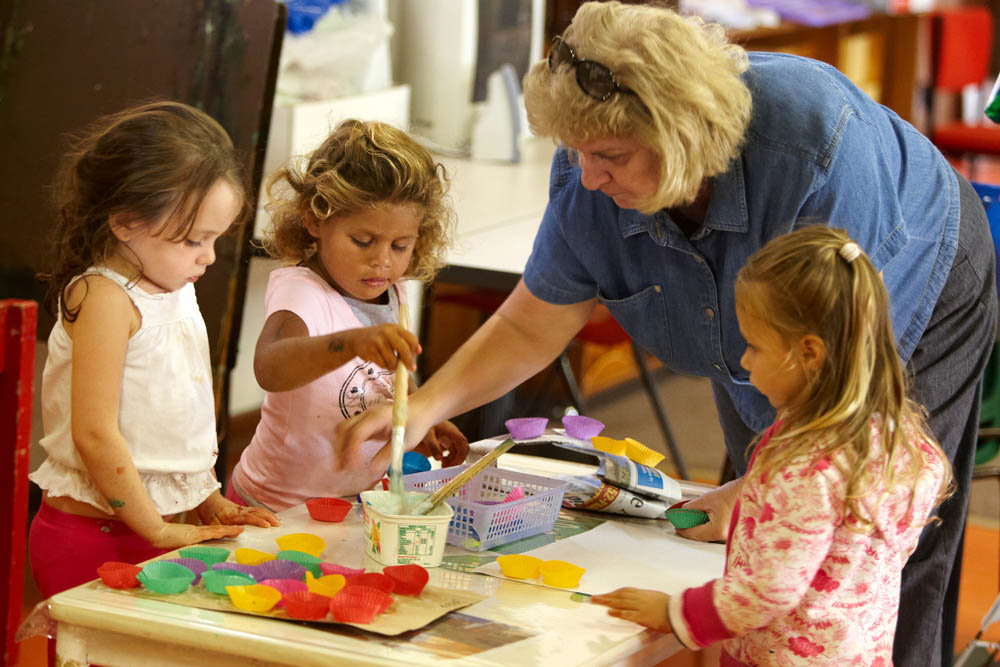 Children like to draw. Around the age of two they discover the sheer pleasure of making marks. They pick up any crayon, pencil or pen and they scribble.

Our toddlers are not trying to represent reality with these scribbles. It is simply a joyful exploration of their own new found power – the ability to make a permanent mark on the world.

The importance of scribbling

At around three or four years of age, the earlier straight line scribbles evolve into circular scribbles and this is a very important milestone. Their big, continuous, round scribbly lines begin to join up to make enclosed circle shapes.

Gradually the scribbles shift from simply being an internal visceral pleasure for young children as the adults in their lives search for messages in their marks.

Circular shapes become heads, or the sun, or flowers. Mums, dads, grandparents and carers assign meaning to their scribbles, “Is that mummy?” “What a beautiful flower!”

Through the encouraging conversations and modelling from adults, their scribbles have now become recognisable as “things” to others. This is also an introduction to the complex and abstract notion that written words are also symbols of meaning.

Our children begin to understand the communicative power of their mark making.

The next important development is the ability to recognise an “inside” and an “outside” of those shapes. Dots on the inside become eyes and noses, lines shoot from the outside to become arms, legs, sun rays, petals and stems. These same skills are needed to refine their alphabet letter writing.

The adults in their lives are thrilled and those positive responses give great encouragement to our children. Their drawings are lauded, put up on childcare walls, popped on to refrigerator doors. And so they draw and draw.

From a four year old’s perspective – what is not to like about drawing? It gives them immense intrinsic pleasure, and it seems to make their loved ones happy too. Except, apparently, when it is on the bedroom wall … in biro …

It is not all rainbows and flowers

A look at fridge doors around the country and you could be forgiven for thinking that scribbles evolve into an obsession with flowers, suns, rainbows and pointy roofed houses. Five and six year olds seem fixated on them.

It turns out that these are all fairly simple shapes to draw, and they represent very easily recognised schemata, which means you get a lot of kudos and appreciation from your audience. Drawing them brings a lot of external praise and internal pleasure.

But a closer look at the drawings of five, six and seven year olds can reveal much more than sunshine, lollipops and rainbows. The proportion of the objects in their drawings has little to do with real life.

Things that make an impression on them loom large on the page. Hence, belly buttons and eyelashes often feature prominently in young children’s drawings of themselves.

On a more sobering note, fences and barbed wire feature prominently in the drawings of children in detention centres.

By around age seven another drawing milestone is reached as children start to anchor their drawings on the page, where previously their objects had floated randomly in space.

They draw in baselines and skylines, usually thin lines of green grass and blue sky, as they try to represent the world they see around them.

Why do children stop drawing?

By the time they are nine or ten, for many children, the sheer joy of drawing begins to fade away. They begin to see their drawings through harshly self-critical eyes as they seek to represent reality and find they lack the skills to do so.

Their pretty schematic flowers anchored in a line of green grass no longer look real. They know that hands are not circles with five radiating lines attached but they can’t draw real hands.

The adults in their lives who had once loved everything they drew now seem less enamoured. At school the teachers no longer encourage drawing, and many discourage it – “you can draw a picture if and when you finish your writing”.

Everything seems to be conspiring against our children continuing to draw.

We need to teach drawing

When our ten year olds stop drawing because “I’m not good at it”, they lose an important learning tool. When drawing is allowed to slip from our creative and communicative repertoire, we are disadvantaged.

Drawing allows us to test and play with feelings and ideas. It nurtures the verbal skills of reading, writing and speaking.

Drawing is a means of closely observing the world around us, recording what we observe and using that as the basis for further enquiry. It can be an important player in our internal dialogue as we work through conceptual challenges.

But the reality is that most children simply give up on drawing because they receive no instruction.

It’s not about creating masterpieces

Not all children will become great novelists yet we do teach them writing skills.

We understand that the benefits of writing are so much more than the remote possibility they could become professional writers.

Not all children will become great artists so it seems we don’t teach them drawing skills.

We need to understand that the benefits of drawing are so much more than the remote possibility they could become professional artists.

3 thoughts on “What can we learn from children’s drawings?”

thank you for your article – yesterday I sat with the children and they drew under instructions and the result were amazing – 4 years telling me “I can’t I can”t” went on to create whole complete wonderful figures.

Thanks for sharing this with us ……..Very informative post.

Great post, Drawing is a method of showing your thoughts to the world. It does not have any boundary, but if you really try to understand what they have made you will realize there is much to predict and understand.