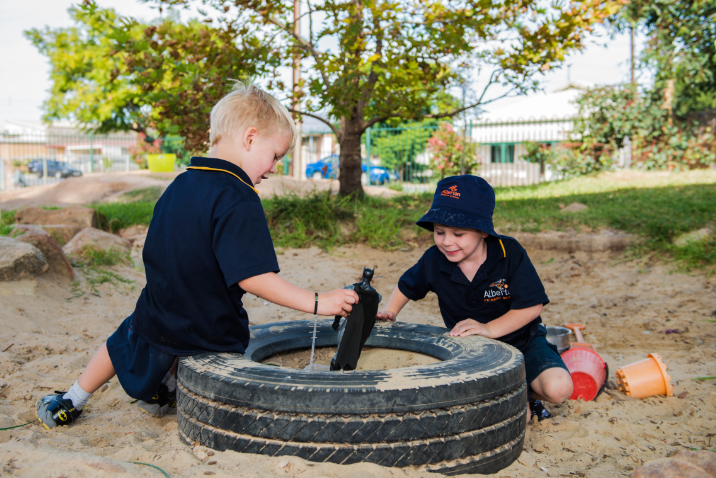 Neighbours―everyone needs good ones―or so we’re told. Learn more about one service’s experiences when relationships weren’t ideal and how they made them better.

Early childhood education and care services are often very aware of what is in their local community. Surrounding parks, shops, fire and police stations and other places of interest are often utilised to support children’s growing awareness of being part of a broader community. There might also be residential houses on either side, at the back and over the road.

Having an early childhood service in your street can be a real bonus to young families, saving time and energy in transporting children areas.

We know that early childhood services are happy, busy, noisy places. Hearing children enjoying themselves, playing in the playground might be music to our ears, but how do your neighbours feel about the constant noise of children, families and all sorts of traffic?

One KidsMatter Early Childhood service took an honest look at how they worked with their local neighbours to build positive relationships that supported their action planning and discussions around ‘Component 1: Creating a sense of community.’

Syndal Child Care and Early Learning Centre is a small privately owned service set amongst residential houses in the southeastern suburb of Melbourne. They are a culturally diverse service offering education to children and families from many countries.

There was a time when the service struggled with the impact of some negative feelings towards them. Neighbours complained about the noise coming from the children’s playground backing onto the nearby street. There were also some concerns from other neighbours about car parking and congestion difficulties.

It took time and commitment, but the situation and feelings towards the centre’s presence did change after the team made intentional efforts to establish connections with their community. Having this new focus meant the team also had their goal for ‘Component 1 Creating a sense of learning: To develop meaningful relationships’ with our local neighbours in the street. They also linked their goal to ‘National Quality Standard: Quality area 6-Standard 6.3.4: The service builds relationships and engages with the local community’, into our Quality Improvement Plan

Andrea, the centre’s manager, explains that taking an honest, gentle approach helped turn around these negative attitudes and relationships.

Taking an honest look at what the neighbours think

Negatives vibes towards our service developed over time. We inherited some of this negativity from the previous proprietors, but we all needed to take responsibility. We felt that in part we caused these negative vibes. To our neighbours, we were a nameless educational centre that changed the shape of the residential landscape by altering the appearance of a residential house in our efforts to create a place where children could learn, grow and develop.

Families with young children loved us, but the response was less than appreciative from the street.

Our presence affected the neighbours because:

So several years ago when we first arrived, the neighbours connected with us in the same ways they had with the former owners. This meant any little annoyances or perceived breach went straight to the local council. Anything that was out of the ordinary―our special person’s nights, Saturday family get-togethers, evening meetings … kept us walking on eggs shells.

An aggressive approach was not the answer. We set about repairing the relationship with our neighbours, by opening up the lines of communication.

Initially, we went bearing gifts; treats to eat and items the children made. This lead to us closely listening to their concerns― and responding in an approachable, friendly ways.

We began notifying neighbours if there were any special functions planned at the service and apologised in advance for any inconveniences.

We feel that our neighbours now find us more approachable, so when a problem occurs we talk and they realise we will do our best to solve it. Educators feel more at ease, and the rewards have been fantastic to see.

The children now wave to the neighbours as they come in, or while playing in the yard.

We still take chocolates to our neighbours each Easter and Christmas as a small thank you to them for the occasional inconveniences we cause. They are part of our community now and welcome those who are keen to participate in our special events. We hope that our experience has gone some way towards developing a more inclusive and accepting community.

Andrea explains that connections with their neighbours are still an important aspect  of the services’ curriculum:

The Easter and Christmas chocolates are a permanent thing and have made a significant difference to our neighbour’s perception of us over time. They do put up with a lot of extra traffic that is generated by our service. So we understand their concerns

We receive lovely Christmas cards from some of our neighbours now, and educators are on friendly terms when they meet neighbours on the street. Sometimes educators have been able to assist a couple of elderly neighbours with some issues, and we always invite them to some of our events. A few come and enjoy our events

Some neighbours love to donate items to the centre. They come in with bundles of goods. Their emphasis is now “It’s for the children”. Sometimes the items they bring are useful, sometimes not so, but received gratefully anyway.

We’ve extended our view of neighbour now to include our local school. We are on excellent terms with our local school, we are invited to events with the children, and their door is always open. It works both ways, our doors are open too. We receive visits to our kinder group from teachers and school children.  Our Kinder teacher Jess recently acquired school uniforms including school bags, and they are proving extremely popular dress-ups with the kinder group.

Who are the people in your neighbourhood?

As you work through Component 1: Creating a sense of community in the KidsMatter Early Childhood Framework and professional learning you could think about who your neighbours are too. Perhaps start with these questions:

If you have a neighbour story to share with us … we’d love to hear from you.

This post was originally published on KidsMatter’s Shared Thinking blog Building connections and resolving conflict by getting to know the neighbours.

Andrea thanks for sharing this positive story about building positive relationships with your neighbours and local community. Your ethical approach based on active listening, respect for others’ perspectives and improved communication has made a significant difference for the centre, children, families, educators and the neighbours!

Thanks for sharing the information regarding Relationships with your neighbours and local community.