ECA Members recently received an email communication explaining that the Federal Government intends to introduce a phonics check for Australian students. The phonics screening test that has been applied in the United Kingdom (UK) since 2012 has been recommended and, if agreed by the Australian states and territories, will be administered to students in Term […] 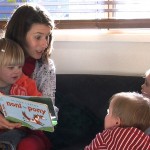 Astoundingly, there is recent evidence that babies come into the world with ‘a primitive number sense’! Scientists in the USA (Nuwer, 2013; Duke Today, 2013) have found that babies as young as six months of age notice the difference between screens containing 20 dots and those showing 10 dots. Babies are more intrigued by the […]