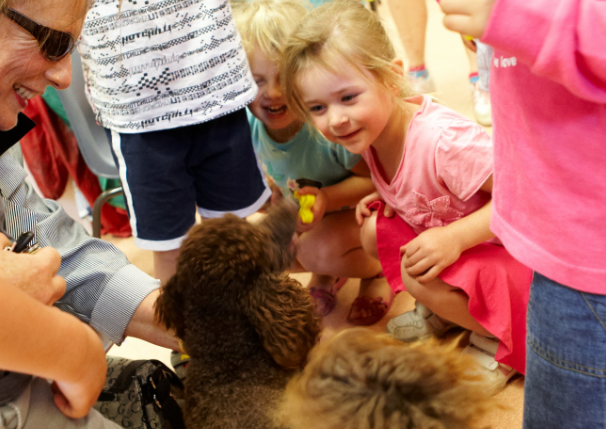 Daniel the “emotional support duck” is a pretty big deal, both in the animal and human world. His 15 minutes of fame began after he was spotted on a flight in the US – from Charlotte to Asheville, North Carolina – waddling around the plane in a nappy and some stylish red shoes.

He is said to help his 37-year-old owner, Carla Fitzgerald, battle the post traumatic stress disorder (PTSD) she has had since an accident in 2013.

The use of “emotional support animals” has become big business recently – particularly in the US – and it’s not just ducks like Daniel that humans have claimed make a helpful addition to their day-to-day lives.

There have also been reports of emotional support pigs, cats, turkeys, chickens and even miniature horses. It seems that all types of animals are increasingly being used to assist patients – in the belief they can help people with autism, PTSD and other conditions function in their everyday lives.

But of course, despite this new wave of popularity, interacting with animals has long been considered to be good for people. There has also been issues raised with the number of animals used in this way – with some animal researchers raising animal welfare concerns. Therapists have also expressed their concern at the rise of “emotional support animals” – with many in the profession feeling not all of the animals used are legitimate “support animals”.

“Emotional support animal” or “pet” aside, it is maybe obvious that one of the main benefits that comes from a friendship with animals is that they are a source of “non-verbal” and “non-judgmental” companionship for both adults and children. These are friends who will be there for us day in day out. Friends who will always be up for a walk or a chin rub, or a game of fetch.

Many pet owners also describe the “social lubricant” effect of their pet – reporting lower incidences of loneliness and depression.

Dog owners typically – but not always – have higher levels of physical exercise than non-owners. And animal contact is often associated with exposure to the outdoors and natural stimuli – which is considered to be beneficial for human health and welbeing.

Novel situations and experiences also often result from animal interactions – which can create enjoyable and motivational learning opportunities for children.

Contact with animals is also widely regarded as an essential and natural part of childhood. I still remember my very first pet rabbit with deep affection. That rabbit “Fiver” – yes, I was a Watership Down fan – represented my first real responsibility for another living being. She was also a great friend and confidant.

And it is this realisation, that animals can be good for children’s development that explains why so many recent studies have focused on animal and children interactions.

This has led to animals increasingly being viewed and employed as useful partners in the educational and emotional development of children. There are now, for example, many schemes where children read to dogs to develop their reading skills with a canine “listener”.

But while dogs and horses are the most commonly used species for therapeutic and educational interactions, a range of other animals – ducks and miniature horses aside – have also been used successfully.

A recent study, for example, examined how interactions with classroom guinea pigs impacted on children with autism. And it was shown that for these children, spending time with the guinea pigs resulted in significantly improved social skills and motivation for learning.

There are also other identified developmental benefits for children interacting with animals. Evidence suggests that children exposed to animals may have improved immune systems and a reduced incidence of allergies.

But of course, despite the benefits to both children and adults, the welfare of animals used in therapeutic, educational or other interactions, is also important.

Swimming with dolphins and direct encounters with other exotic species has previously attracted attention for therapeutic value – especially for children with physical and intellectual disabilities – though recent guidelines now strongly advise against the use of such species. This is both due to animal welfare concerns and concerns for human participants.

This is why any animal involved in such interactions needs positive and ethical training, along with high health and welfare standards. All of which will help to make sure that the animals people are engaging with in these environments are happy animals – which can then in turn help to create happy humans.

One thought on “How animals can help autistic children”

My youngest child is quite sensory, and while his confidence in interacting with people continues to grow as he gets older; he has always had wonderful interactions with animals and I firmly believe that his love of nature and animals in particular have helped him develop his skills in empathy and nurturing at a faster pace than if he’d not been exposed to a lot of animal interactions.
The more he becomes aware of compassion and empathy for his animal friends he is able to recognise the need for these feelings in relation to his human friends too. It’s a definite win for us 🙂